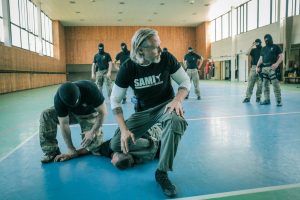 In our courses and seminars we instruct operative forces, candidate instructors and civilians relevant to their vocation or environment.

Only properly trained personnel is in a position to professionally and appropriately execute their duties under difficult or threating circumstances (e.g. attack, intimidation, verbal abuse). Our goals: